Established at the end of 2019, Enigma Chamber Opera had just completed their debut production (Britten’s The Turn of the Screw) when the world went into lockdown. Undeterred, they began to plan a remote show. Artistic Director Kirsten Z Cairns had always been intrigued by Mozart’s Der Schauspieldirektor (The Impresario) – she was struck by how modern and relevant the text seemed, telling the comic tale of the struggles faced when trying to stage an opera. In 2020, those struggles included a whole new set of challenges; so Cairns hit upon the idea of creating a new version of The Impresario, exploring (and trying to see the funny side of!) the trials of artists in isolation. ‘A lockdown opera for the Covid Age’, as the script tells us!

Collaborating with brilliant media designer Peter Torpey and script writer Simon Robson (who also plays the lead role), Cairns developed her idea, to incorporate an entirely new script and libretto – but retaining the story structure, characters, and wonderful music from the Mozart original. Enigma’s resident costume designer worked with the incredible cast to create the various looks for all the characters, and over the late summer of 2020 the production was filmed – all without any two team members ever being in the same room!

There are subtitles available: at the bottom right of the YouTube viewing screen, you’ll see a ‘cc’ button. Click that to turn on closed captioning. You’ll also find a synopsis in the box below the viewing screen; click ‘SHOW MORE’ and you’ll get the full cast list, synopsis, etc.

It’s free to view – Enigma Chamber Opera decided not to charge, as they are keen to spread some laughter and light relief in these dark days. (Though, of course, if you’d like to support them, you’ll find a link for donations on that YouTube page.) But most importantly, just enjoy! 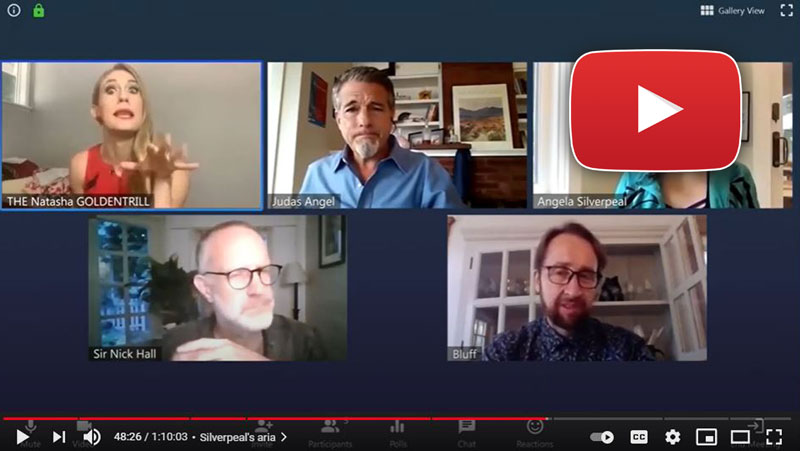 CAST (in order of appearance)

Music by: W A Mozart